LIMIT ONE - In an effort to help get these into the hands of all of those who have been waiting I am limiting these to one per customer until further notice. Attempts to make additional orders will be refunded.

The HDZ Stock was created by Haga Defense in response to the discontinuation of the Magpul ACR stock. We wanted to create a replacement option that closely resembled the look, feel and function of the original ACR stock right down to its Magpul roots.

The core of the HDZ setup is the tried-and-true Magpul Zhukov stock. While originally designed for the AK/AKM platform the Zhukov stock has been retrofitted with a custom hinge and top cover that will allow it to flow seamlessly with your firearm and look/function as if it were a factory option.

To adjust cheek riser remove set screws (6) with included or other 1/16” hex wrench/tool, move riser to desired position being sure to align cheek riser holes with corresponding holes in the top cover then reinstall set screws. DO NOT tighten set screws until they stop! They only need to be tightened until the top of the screw is flush with the outer surface of the cheek riser. Failure to do so could result in damage to the stock, top cover and cheek riser.

Use as a Pistol Brace:

The HDZ Stock can also be configured as a pistol brace by using the Gear Head Works Tailhook MOD1/MOD1C pistol braces with the Haga Defense Tailhook Adapter for Zhukov Stocks (NOT INCLUDED).

Differences when installed on a rifle caliber APC vs a pistol caliber APC. 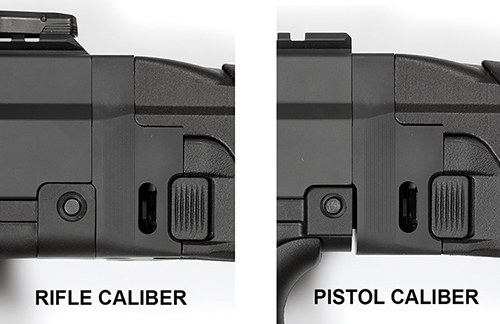